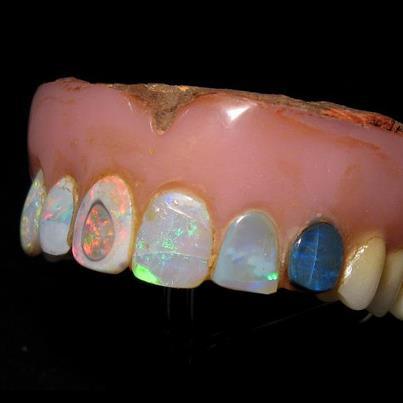 There are some amazing stories out there and it seems the opal world has more than it’s fair share. The most jaw dropping (pardon the pun) is the story of Harold Hodges and his false teeth.

Harold Hodges was a colorful character who, in the late 1950’s came to Lightning Ridge and opened the first motel, the Tram-O-Tel which is still popular. Jurgen Thomas, Justin’s father, remembers him as a tough man and even tougher opal buyer. There are many stories about his antics as he was also the local bookmaker and slaughterhouse owner. Harold would have a footnote in history like many of the men in the Ridge at that time if it wasn’t for his spectacular opal denture.

It was these dentures that elevated Harold to legendary status. Made by a dental surgeon, the teeth were inset with an assortment of opals that would make any modern day rapper proud. His notoriety grew and after years of enduring “Smile Hodgie” he had them cemented into the wall of his favorite corner in the local pub.

Retrieved by his wife a few years later and entrusted to a mate when he died, the teeth were then donated to the Australian Opal Centre where they are on display today. Long live the colorful characters of the Ridge I say!