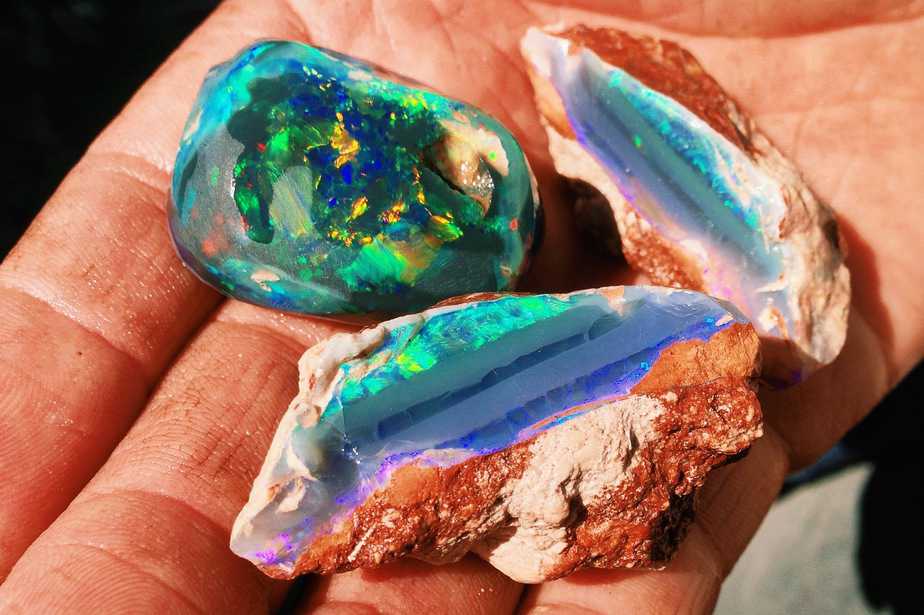 The Aboriginal origins of opal are part of the Dreamtime stories. There are a number of stories and at least two from the Lightning Ridge region. The one I think resonates the best and which can be verified is from a wonderful wise Aunty (Elder) in Lightning Ridge.  She hailed from the local Kamilaroi people and was much loved in the community. She always had a smile and a laugh at the ready. The dreamtime story of the origins of opal was passed to her and it is repeated in her words below.

HOW THE OPAL CAME TO BE

A long time ago in the Dreamtime, one of the most beautiful of all creatures was Pallah-Pallah the butterfly, with her beautiful dazzling multi-coloured wings. She lived happily with her family near the reeds of the Corcoran Lake.

She would often wonder the high mountains they could see along way away which were covered in white, and the white on the tops of the mountains would shine when the sun shone on them.

Her husband who was named Ballah-Ballah often told her not to leave the safety of the grasses and reeds that grew around their home on the beautiful clear water lake. But one day when her husband went fishing. Pallah-Pallah thought she would go and have a quick look at the white on the mountains.

When she flew up high everyone looked at her beautiful coloured wings and said “she looks like a rainbow”. Pallah-Pallah flew higher and higher, and she could see the mountains covered in white. She was excited and said “ I will go right up there and see this white for myself, then I will return and tell my husband.”

As she reached the high mountains snow began to fall. Snow beat down on the frail and weak Pallah-Pallah. She fell to the ground and the snow covered her. She didn’t die, but lay quiet and went to sleep while the snow fell and buried her.

She lay under the snow until spring came. As the snow melted away so did Pallah-Pallah’ beautiful colours. The colours just disappeared, melting into the snow. As the snows melted down the mountains and across the plains the colours ran with them to disappear into the ground near the lakes and ridges. Pallah-Pallah looked at her wings and they were no longer beautiful.

She returned to her husband and family and everyone was sad to see that she was no longer a beautiful butterfly but a plain moth, just grey and brown. The beautiful colours that disappeared from Pallah-Pallah’s wings went into the ground at the Morillah* – stone ridges and lakes formed the colours of the rainbow on the dazzling opal stones. That is how the opal came to be.

*Morilla St is the main street in Lightning Ridge.