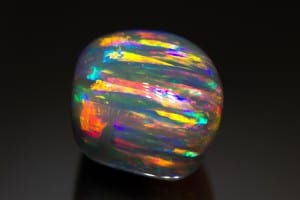 It’s not often we are dumbstruck when it comes to opal but this one had us FLOORED. Recently discovered and mined by a long time friend in Lightning Ridge this opal represents a once in a lifetime find. Aptly named The Rainbow Serpent Opal after the aboriginal creator of life, the gem weighs 30.56 carats and displays a striated pattern of reds, blues, greens, oranges and gold. It has been identified as striated pattern with a lizard skin pattern on the sides of the gem. The colour play is vivid and three dimensional as the opal is moved around. “When I saw the opal, I was astounded that it was even real, the lines… 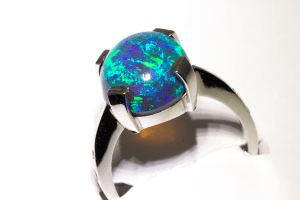 We buy opal for many reasons, most obviously because it’s beautiful, but there is often something more. It speaks to us. It tells us a story about our best selves. Opals have energy. Life is about stories; we hold on to things because of the stories they tell us, the memories we cherish. Opal is the ultimate storyteller; it’s been in the ground for millions of years, waiting to be discovered. From miner to cutter, to you. This journey could have taken days or could have taken years but imagine the energy and the stories contained in that piece of hydrated silica! Justin and I each have a stone that…

The perfect opal in the world is a big call, but we think this stone most definitely qualifies! Body tone: N1 Brightness: 5 out of 5 Color: Red Red Red! Pattern: Harlequin Many years ago, this stone came to us as a roughly faced piece of black opal. It sat on the cutting bench for a few days whilst Justin’s Dad Jurgen examined it from every angle. He took his time. He could see the promise of the stone and knew that with patience and care, something beautiful would come. The color bar was thin; one wrong move and the color would be gone. Slowly, slowly he cleaned the piece…